The second day of 2016 was one of the coldest days of this winter so far, meaning that it only got up to around 50 degrees. We went downtown with Adam and my parents to the Freer Gallery, which is closing for at least a year for renovations after this weekend. We wanted to see Filthy Lucre, part of the Peacock Room Remix exhibit interpreting Whistler's masterpiece as an icon of excess (someone really should write a screenplay about the collapse of Whistler and Layton's friendship using their own words from their letters) and we looked at some of Whistler's other paintings before heading over to the Hirshhorn for the surrealist sculpture exhibit Marvelous Objects, which as you might expect ranges from the sublime to the completely and utterly ridiculous.

As you can see from the photos, we encountered flowering trees, plus some dandelions, emerging daffodils, and roses and rhododendrons which might have been blooming in the unseasonably warm weather or hanging on from the summer after a long, warm fall; we weren't sure, just as we're not sure what the winter budding will do to the cherry blossoms when it's actually spring. The Freer had an activity where patrons got to build their own versions of the reconstructed museum. We drove out of the city at sunset and went to my parents' for lasagna, where we also watched some of the Liberty and Alamo Bowls, and now we're watching the Cactus Bowl, though I have no really strong feelings left except that I'd like Clemson to win the championship! 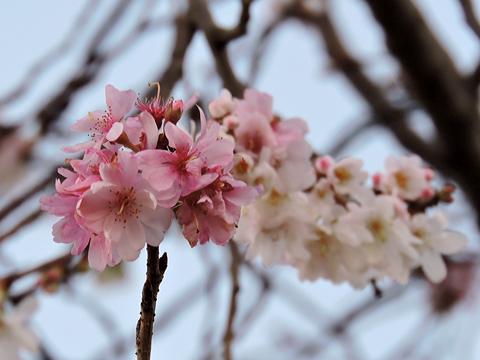