Cheryl came over to play and watch probable Oscar-nominated movies with me and Adam on Monday, which was by far the coldest day of the year (she even saw flurries in Virginia, though I don't think we got any here). We started early at my house with The Woman He Loved, the Anthony Andrews/Jane Seymour retelling of the Edward VIII/Wallis Simpson love story, which of course we enjoyed despite the complete dearth of George VI. Then we went to the mall to get Indian food for lunch.

Then we saw The Big Short, which is definitely the best movie I've seen this awards season and the best I've ever seen about what's wrong with Wall Street. The script and directing are extremely clever, the acting is great, it's surprisingly humorous even though it's also rather depressing -- I never imagined a movie about the housing bubble could be so much fun. We came back and took a walk to enjoy the chilly weather, and though we did not see bunnies, we did see flowers!

Since we were on a roll with great movies, we decided we really needed to go see Spotlight, which I'd been told was The Big Short's major Best Picture competition. It's also excellent -- a more traditional historical drama in which journalists are the heroes as in All the President's Men, also with a great cast (and characters whom I suspect more people can relate to than Wall Street bankers). So a great movie day! Holiday poinsettias at the Rawlings Conservatory: 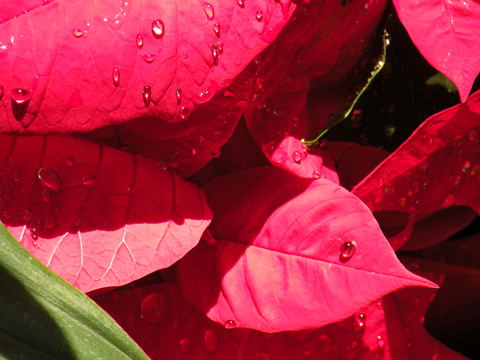