Wednesday was nearly as cold as Tuesday and I think the flowers that started to emerge in December may be regretting that premature process! I had work and chores to do, though some of the chores ended up being fun, like folding laundry while watching the first two episodes of Bones -- a show I had never seen till they did the Sleepy Hollow crossover last fall. I hate forensics shows unless they're archaeology, but I really like the characters and actors.

It was mostly a quiet indoor day, though we did take a walk and worry about the deer we saw in the very cold woods. Son worked at the neighbor's. After dinner we watched Irrational Man now that it's on demand; I'm not sure whether it's Woody Allen's very most repulsive movie but it's quite high on the list, and since she keeps working with him, Emma Stone is rapidly becoming one of those actresses I just can't watch. Now we're watching the excellent Particle Fever. Look, growing kittens! 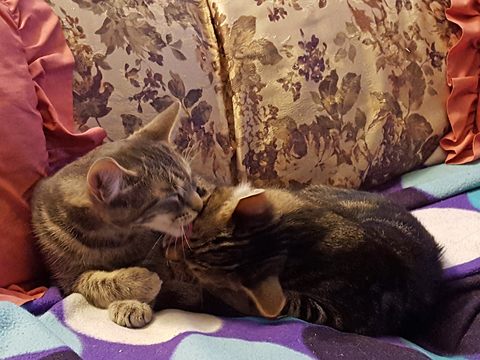