It was rainy and gray all day Friday. I had a bunch of work to get done in the morning, most pressingly a review of Voyager's "The Thaw", an episode I have never been able to stand, though I was told 20 years ago and have been told again by many that I am wrong! In the afternoon, we had to go to the pet store for kitty litter and cat food, plus to Giant for assorted weekend dinner essentials and to Michaels for fasteners (are we supposed to be boycotting them for their political donations? I read somewhere that we are, but they must beat Hobby Lobby). Adam had gone out to lunch with Christine and brought her to dinner at my parents' house.

Then Adam went to play cards with friends, and Paul and I went to see The Danish Girl. I'm puzzled why Bridge of Spies and Carol did so much better with BAFTA nominations than it did; I thought the acting (Vikander's in particular) was superb, the screenplay was moving, and the directing was about on par with this year's biopics. It's not up there with The Big Short, but few films have ever been, and I found Carol so contrived in its use of visuals -- mirrors and windows, symbols of division -- that it made it harder for me to feel for the characters, whereas Lili's story seems more painful and true. From a few weeks ago, some National Aquarium turtles: 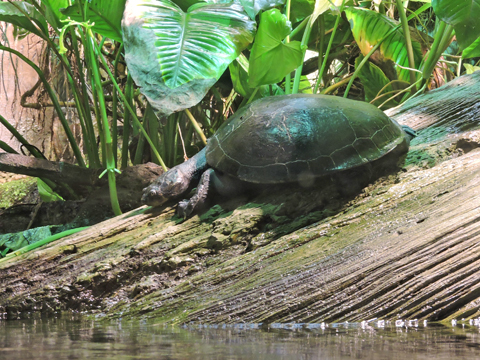