I had a very nice, very full Saturday! We got up early with Adam to go to the National Zoo, which is allowing members to visit the panda habitat and meet Bei Bei a week before the rest of the public will be allowed in. The baby panda was sleeping, but his older sister and parents were up playing and being adorable. We saw some of the animals we didn't get to visit during ZooLights, and I ran into an old friend on the way in.

We came home for a late lunch because I had plans to meet Angela and her sister Katie at Montgomery Mall, where the Lilly Pulitzer store was doing a fundraiser for a pet adoption group that included having kittens in the store for prospective adopters to visit. We walked around a bit in the mall, then came back to my house so that Katie could meet my kittens, who are bigger now than the babies at the mall.

In the evening, we went with son to meet Kay, Chris, and their sons at California Pizza Kitchen for dinner. All our menfolk are engineers or pre-engineers, so they always have things to talk about, and it was very nice to catch up. We dropped Adam off for a late game night with friends and came home to catch up on still-engrossing Heroes Reborn, and now the extremely messy end of the Bengals-Steelers game! 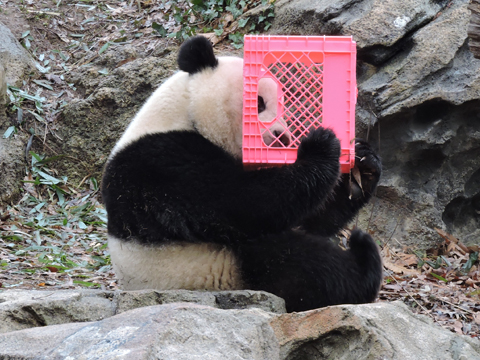 Quickie -- have been watching the Golden Globes with Cheryl, Paul, Adam, and (for most of it) Christine -- all worthwhile for Ricky Gervais' takedowns of Mel Gibson and the HFPA itself even if a lot of the awards were clearly purchased by big media companies and I sincerely hope the SAG, Emmy, and Oscar voters have more sense and that Katy Perry gets a better wig and Rooney Mara gets a better dress. "How To Lose Gracefully To Jeffrey Tambor" indeed! Earlier we went to Hillwood for the last day of the holiday decorations and Ingenue To Icon: 70 Years of Fashion from the Collection of Marjorie Merriweather Post, then the Phillips Collection for the last day of Gauguin to Picasso: Masterworks from Switzerland The Staechelin & Im Obersteg Collections, both excellent. Then we came home for dinner, snacks, and the red carpet! A few pics -- more tomorrow!