Cheryl and I had plans to get up and go see Trumbo, but instead we got up to the news that David Bowie had died. So since we were feeling sad and nostalgic, we ate breakfast and watched Labyrinth with Paul, who was working from home because the cold (as it has done before) was making our tire pressure light go off even though the gauge said all four tires were fine. It is as exceptional as ever. Then Cheryl and I went to Blaze Pizza and to The Martian, which she had not seen. That remains exceptional as well, and it's fine with me if it wins Best Picture and Best Actor at the Oscars...sorry, Leo.

Since it was cold but not miserably so, we went for a walk in the afternoon, where we saw deer and the stubborn daffodils sticking out of the soil. By then we had decided that we really did want to see Trumbo together and Paul was done with work, so it was movie time for us while Adam went bowling with his friends. Trumbo is also excellent -- both Cranston in the title role and Mirren as the horrible Hedda Hopper, as well as the rest of the cast and a fairly well-balanced if biopic-typical screenplay. After Cheryl went home, we put on the college football championship, which was a fantastic game until the end when Clemson didn't win! 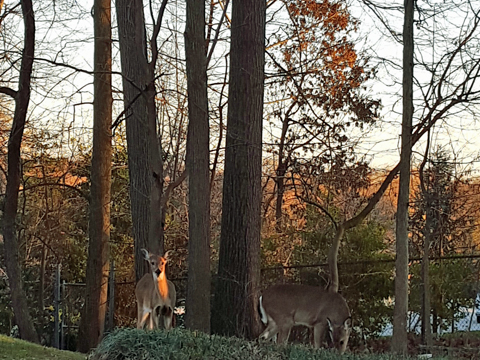