It was not a very eventful Wednesday, which was chilly though sunny here, ending with a spectacular sunset which we saw while out walking (and also saw two bunnies, first time in a while!). I watched the Voyager episode I need to review this week ("Tuvix" -- still problematic but not boring for a minute), went food shopping (where are the Morningstar Farms buffalo chick'n patties it's been THREE WEEKS Giant), and watched Burnt with Adam, which we enjoyed though it's as close to Ratatouille as Avatar is to Pocahontas.

Paul made (fake) salisbury steak and potatoes for dinner, then Adam went to Christine's to watch Nausicaa, while the rest of us watched The Prestige long-distance with Cheryl in honor of David Bowie's Tesla. I will always love this movie; in addition to that phenomenal cast (Jackman, Bale, Johansson, Caine, Hall, et al) and a really tightly-written screenplay, it has the kinds of stunning visuals and plot twists the Nolans do so well with little of the violence. From the zoo last weekend: 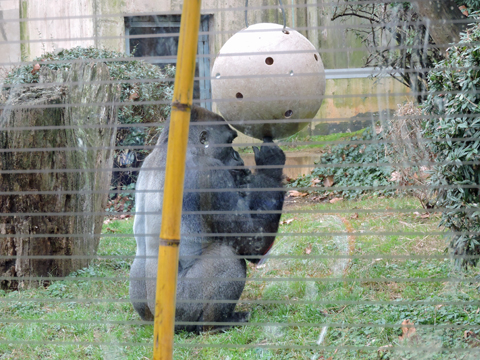 It's not, of course, as if I knew him. And as sad as it is when any good person dies, it isn't even HIM exactly -- it's a trajectory of my own life that he impacted. Several of the people who will read this, dear friends, are people I very likely would not have met if it weren't for him. Many of my intellectual and creative endeavors of the past few years wouldn't have happened if not for him.

Two days ago I was reflecting on the reasons David Bowie had made an impact on me, which were largely non-musical -- oh, I loved his music, but it was the gender-and-sexuality-fluid persona, the insistence that queer people had every right to be themselves whether on public stages or to their own family members, the transgressive characters he played and discussed from Labyrinth and The Prestige that really set him apart for me. With Alan Rickman, it's words I can't imagine spoken in anyone's voice but his own, even words none of us ever heard him speak because they existed only in fan fiction.
Collapse