The weather on Saturday was beautiful -- partly overcast, in the low 50s. We met Paul's parents in Brunswick, where we enjoyed it, though first we had lunch at Beans in the Belfry, the wonderful coffee and sandwich shop in a former church; then we walked a bit to one of the antique stores and down to the train tracks along the river where we'd parked, from which we drove to Catoctin Creek Nature Center, which has barn ruins and local wildlife -- turtles, frogs, insects, and several snakes, one of which I got to pet and another of which I got to hold! After that, we all went to South Mountain Creamery to see the cows, buy milk and cheese, and eat excellent ice cream. 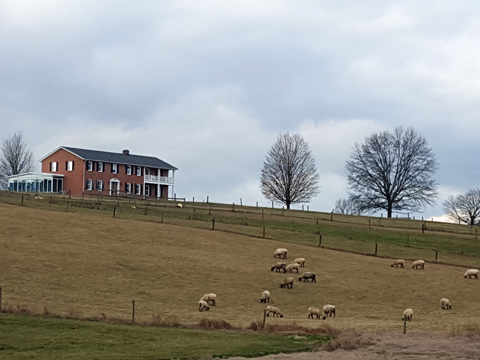 We got home in time for about half of the Patriots-Chiefs game, which I didn't care all that much about (I'm likely to root for the NFC team left standing). Then we had stew for dinner and Adam went to see The Revenant with friends while I watched Sense and Sensibility with Cheryl, which we've wanted to do since before Thursday morning (Paul was very cooperative despite it being a playoff night). We were finished in time to watch the fourth quarter and overtime of the terrific Green Bay-Arizona game, whose only bad aspect was that the Packers didn't win. Now we're waiting for the news to end and SNL to start!
Collapse