We had actual winter on Sunday! Nearly two hours of snow! None of it stuck for more than half an hour, but it was pretty to watch, and it kept us inside, so we watched the playoff games and I fiddled with photos and played with cats, who tried hard to steal my lunch and snacks. We took a walk at dusk, when the bunnies come out, which they did tonight; then we had rarebit for dinner and watched Galavant, which just gets better and better.

After that, we watched The Hitchhiker's Guide to the Galaxy, which remains an imperfect adaptation of the book yet also gets better every time I watch, and it's been a while. There are lots of lines in this that we quote frequently, many not even Marvin's, and the cast is an embarrassment of riches. Here are some more photos from Catoctin Creek Nature Center yesterday, which has the ruins of a barn as well as the animals inside: 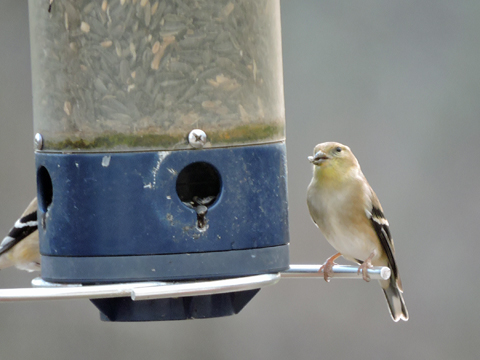