The plans of everyone I know for hundreds of miles around on Friday were determined by snow. It didn't start here till after noon, but we got up and organized early to move Adam back into his dorm in College Park, which was officially closed but allowing students to return a day early because they don't want students traveling on campus on Saturday. We dropped him off and were home for lunch and work, which for me consisted primarily of finishing a review of Voyager's "Resolutions", which is either the best thing or the worst thing that ever happened to the series -- maybe both.

I took a walk around dusk, though it was dark and gray all day, to see the neighborhood in snow for the first time in many months and to see whether any of the bunnies had come out (I saw fresh tracks, but no rabbits). We saw the final episode of Heroes Reborn, which had some flaws but I enjoyed as I enjoyed the whole series; we also saw the first episode of Billions, which is about profoundly unpleasant people all around. In the evening, we watched An Ideal Husband with Cheryl long distance since she's snowed in too; not a perfect Oscar Wilde adaptation, but very enjoyable with a great cast! 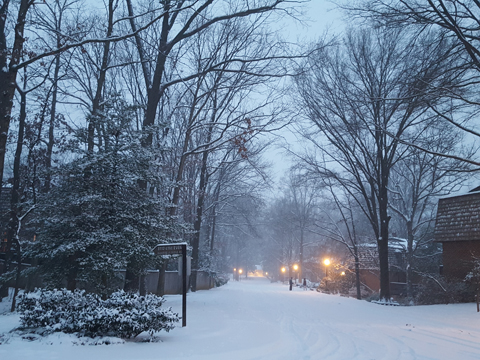