As you may perhaps have heard, the east coast of the U.S. was hit by a blizzard on Friday. We got over two feet of snow here and couldn't see across the street at some points, though the storm is pretty much over now. We discovered some important things, like juncos can find birdseed buried under several inches of snow and kittens do NOT like cold wet paws. Otherwise, it was a pretty quiet lazy day involving reading, beading, and catching up on Elementary.

According to social media, the person who enjoyed the snow most was Tian Tian, the giant panda who fathered the two young pandas at the National Zoo. Adam reports that he spent a mostly lazy day in College Park, where classes have been canceled for Monday. Paul and I watched the US ladies' figure skating championships, which were very enjoyable (I love Ashley but Gracie deserved it), and now we're watching Saturday Night Live. Birds, cats, and lots of snow: 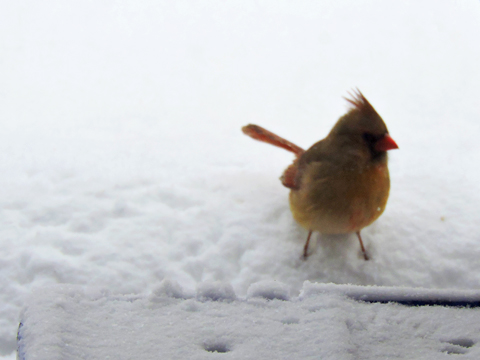