Happy Imbolc or Groundhog Day, whichever you might be celebrating! I spent the first day of February being a slacker and watching movies with Cheryl -- first National Treasure: Book of Secrets since we watched the first one the day before (and it co-stars Helen Mirren and the University of Maryland), then Star Wars: The Force Awakens at Montgomery Mall because we wanted to see it in the theater again before it left, then The Decoy Bride because she hadn't seen it and we were in the mood for fluffy, and finally we watched an episode of Robin of Sherwood.

In between, we picked up Indian food and tried to keep cats from eating it before we could, and we may have had some caramel corn and Junior Mints at the movies since the removal of gelatin from the latter is one of the best things to happen this century. Here are some photos of things we saw the day before at the Delaware Art Museum, particularly the beautiful exhibit on Marie Spartali Stillman, who was strongly influenced by both the Pre-Raphaelites and the Italian Renaissance. (British friends: it's on the way to the Watts Gallery in Guildford next month). 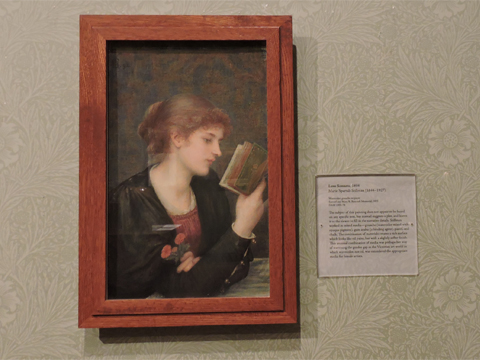