I have had a nice Super Bowl Sunday even though I was rooting for the Panthers, who (spoilers -- hahaha, like you don't know) did not win and didn't play as well as I had hoped, since usually what I want from the Super Bowl unless I absolutely love one team or absolutely hate another is a really good game. We had kind of a slow start because Daniel slept late, but eventually we had French toast and eggs, then we went out to Kohl's because he needed pants and shoes and apparently has had no time to track them down in Seattle. I got the fuzziest jacket in the world for under $8 and Terps sweatshirt for under $15.

In the late afternoon after the Kitten and Puppy Bowls, we picked up my parents and went over to the home ofthe Bergers, with whom we always watch the Super Bowl along with 50-75 other people. There's always lots of food, drink, friends and their kids, so although I'm usually a bit distracted during the first half and its commercials talking to people, it's really fun even if whoever I'm rooting for isn't winning, plus there's always lots of chocolate to console me. Most people stay through the halftime show, which got a lot better this year when Bruno Mars showed up, though I think Lady Gaga provided the top entertainment value! 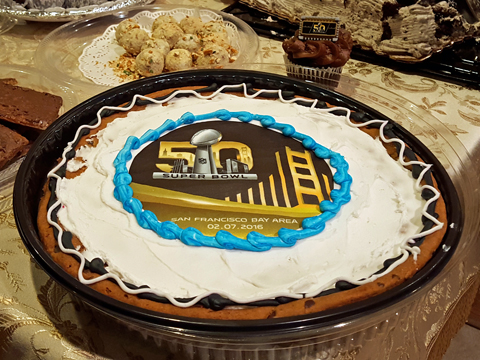