Wednesday did not go as I initially planned. I had passes to go see a preview screening of Eddie the Eagle for all of us, but Daniel ended up having a lot of work, plus a phone conference that went late. So instead we stayed close to home, I worked on a review, and Gofobo made me very happy by having passes available for a screening a week from tonight! We took a walk and saw bunnies and a partial sunset through the clouds, though it was much colder than it has been, then we had chicken for dinner (mine was faux, everyone else's was real) and did various unexciting laundry and dishwasher-related chores.

After dinner, we watched Margin Call, which I thought was very well acted though I'd have been really confused about what was going on from all the attempts to be universal which in places made it vague had we not recently watched The Big Short, which has an equally good cast, though it's always a delight to see Paul Bettany and Jeremy Irons. We also caught up on Supergirl, which I'm still not loving -- lots of good girl bonding this week but if it's going to be teen angst, why can't it have a homey Smallville vibe instead of kicking off with way too much intergalactic war? It makes me long for snuggly crazy cats: 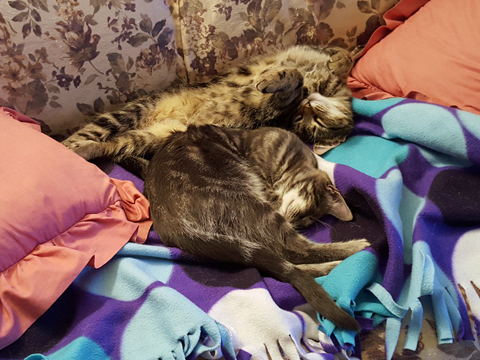