My day has been about snow -- probably 3 inches before the rain started falling on it -- plus chores, cats, and the Grammy Awards telecast. I love Hamilton, Lady Gaga, Taylor Swift, B.B. King, and a sad number of the old white guys of classic rock, so it was very enjoyable for me -- not Adele's best moment but Kendrick Lamar made up for her. We also caught up on Madam Secretary, which I appreciated until I read Tim Daly's tweet hinting that he's leaving the show, in which case next week's may be the last episode of Madam Secretary I ever watch because I don't need any artificial political stress in my life, especially this year. As bad as Downton Abbey has been this final season, I wish we'd caught up on that instead! Some photos from Lewis Ginter Botanical Garden's holiday display last month, which has an undersea theme this year: 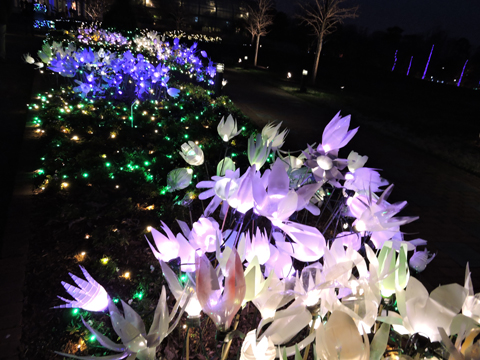