It was pretty chilly on Thursday and I had a bunch of chores to do at local stores, so I mostly worked at home and tried to go from warm spot to warm spot until sunset, when we took a walk to see the color and the bunnies (well, only one bunny tonight) only to discover that it wasn't actually as cold as we'd thought. Since we were avoiding wind chill, we also caught up on Wednesday night's Arrow at lunchtime before the shopping run, and watched Thursday's stressful The 100 (see what happens when the men start making the decisions?) and enjoyable but predictable Elementary (I knew who it would be, just not why) in between phone calls to relatives having birthdays.

Here are some photos I've meant to post for weeks now of Filthy Lucre: Peacock Room REMIX painterby Darren Waterston, in which he redesigns James McNeill Whistler's Peacock Room from the Freer Gallery as a disaster collapsing under the weight of its decadence. My favorite part of the exhibit wasn't even the reconstruction, but the massive screens playing out the hostility between art patron Frederick Leyland and artist Whistler, who began as the best of friends, then began to argue over money and ended up accusing one another of unchecked egotism and self-indulgence. Note the melting-gold ceiling, the shelves collapsing under the weight of their contents, the peacocks unraveling one another, and the faceless painting planned in Waterston's design at bottom: 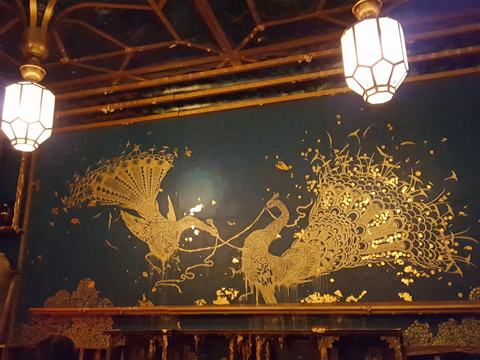