Quickie, went out to Tara Thai with my parents and watched a movie so I'm behind tonight, and I have to get up relatively early for me for a Saturday tomorrow. My morning was about fighting an apparently weather-related migraine plus writing a review of Voyager's forgot-what-a-guilty-pleasure-it-is "The Chute", an episode that barely passes the Bechdel Test yet is still a vastly more feminist, pro-woman story than the movie we watched after tonight's episode of Sleepy Hollow -- not the best, not enough Ichabbie, too many villains, still better than -- the godawful sexist nightmare The Intern.

Why would a female writer attempt to convince us that the world would be a better place under the thumb of old white guys because they know so much better than women what women want (and should be rewarded for that with younger women of their own! White women, like every single character in this nightmare vision of hip young New York!). I can't bear to analyze any further, so here to cheer me up are photos of the National Zoo elephants shortly before young male Kandula, who was born at the zoo, went to live in Oklahoma City to explore and breed with the female elephants there. 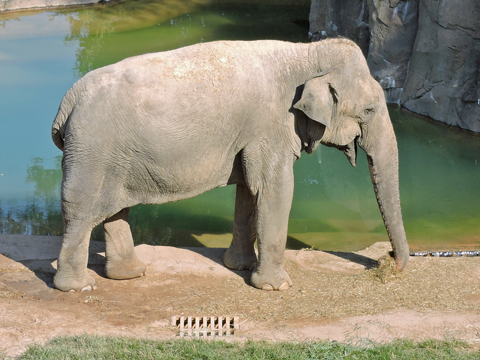