Monday was entirely a chore day, though the weather was lovely and I got out to enjoy it a couple of times before I was hit with a pre-rain headache that has made my evening aggravating. It was so warm that we had chipmunks on the deck as well as juncos, and a big bunny was happily munching our neighbor's yard when we took a walk around sunset. I caught up on some editing, got three loads of laundry finished and folded, got some photos framed, and got couch protectors for the cats who still want to claw the couches but are currently very happy about the box the covers came in. Plus my neighbor Rose visited them.

At lunchtime we caught up on Madam Secretary (which continues to be excellent, though I thought radiation victims were shaved and given enemas ASAP), and we watched what may be the last-ever episode of The X-Files, though it will be extremely frustrating if so; I've had some serious disappointments with this brief season, I didn't care if the entire alien mythology was jettisoned in favor of monsters of the week, I just wanted some good Mulder-Scully stories, and a cliffhanger is just not fair. Meanwhile, some photos from the VMFA's Rodin exhibit, including a noble Victor Hugo and a nude Balzac: 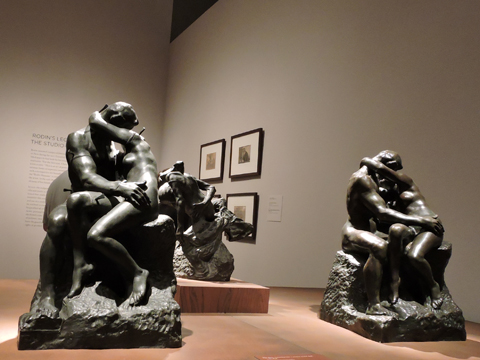