My Thursday was very quiet compared to my Wednesday. I did a bunch of work, went to the food store and CVS, went with Paul to pick up the car which was having its broken rear seat belt repaired, and went for a walk to see whether any bunnies were out munching before the arrival of tonight's expected snow (we saw both the bunnies who live around the corner, which was a relief). Plus we watched my weekly Voyager episode and most of the Terps game, which they won easily over Illinois. And for a change I did not detest Mitt Romney.

The 100 was great tonight -- I'm very sad about the Big Thing that happened though I know it was expected, but I love that on that show, women are so much the focus and get to do all the things usually reserved for men in that kind of story -- it's like a wholly feminist mash-up of Game of Thrones and Battlestar Galactica with some Planet of the Apes thrown in. Elementary is always entertaining but I don't think this week's passed the Bechdel Test. Some photos of George Washington's office in Winchester circa 1755 while Fort Loudon was being built: 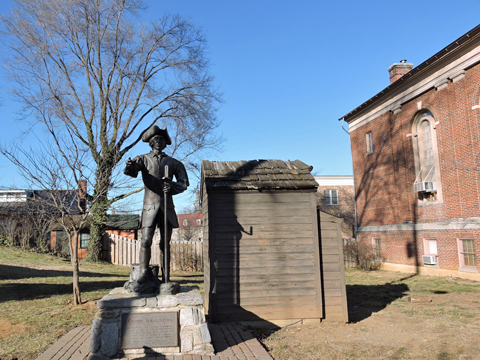