The thermometer got above 80 degrees on Wednesday and we achieved daffodils on our cul-de-sac as well as bunnies in the grass, so it looked like spring! I also watched Voyager's "Remember," one of its very best episodes, and did a bunch of shopping (including Kohl's where I had $20 in coupons plus 30% off plus the sale stuff was 85% off, so I got two shirts for about $4). It was a really good day for being out walking everywhere and I am loving this week! Everyone was happy but the cats, who have discovered chipmunks on the deck.

We caught up on Billions, where it's still really hard to like anyone -- this week's episode is all about marriages and there are big messy problems in all the ones we see, though interestingly for television, sex is not among them, both principal couples have great sex lives. Since there was no new TV, we watched The Peanuts Movie, which is pretty enjoyable, quite nostalgic in its choices meaning it's not at all progressive but it's very sweet and true to the original. Orchids from the US Botanic Garden's show last weekend: 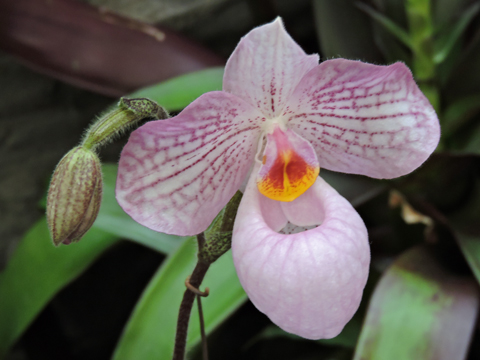