Will people get jealous if I keep talking about how great the weather has been? Once again it was 80ish and slightly overcast -- perfect walking weather, and though I was out too early in the day to see bunnies on Thursday, there were lots of crocuses and daffodils all over the neighborhood, plus the first forsythia and several redbuds. I had to walk early because after a morning and early afternoon of boring stuff, we picked up my parents and got younger son in College Park to go out a day late for my mother's birthday (I saw her yesterday but my father was playing tennis and son had midterms, so dinner was postponed a day).

I did make the terrible discovery that, after several visits to Aroyo Thai during which we asked repeatedly if the panang curry was vegetarian, it had oyster sauce in it, as do all the curry dishes there so I guess next time we drive out to Tara Thai in Hyattsville since hopefully the cooks there, like the ones in Rockville and Gaithersburg, will make the curries vegan on request. We got home in time for The 100, which remains excellent even on a rare week like this when it's all about the men, and Elementary, which needs more Watson this season. Photos from Richmond's Poe Museum, including the gift shop's photos of Gertrude Stein and Vincent Price visiting: 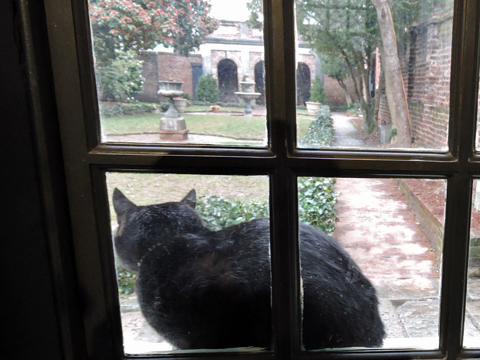