Thursday was Paul's birthday! It started pretty low-key, since I had a dentist appointment before lunch, but we worked together in the afternoon -- at least, he worked in the same room as me while I watched "Sacred Ground," the Voyager episode I need to review this week -- and in the late afternoon we went to Kenwood, the high-end Bethesda neighborhood whose streets are lined with more than a thousand cherry trees, which are currently nearing peak just as the trees around the Tidal Basin downtown are doing. It's much less crowded in Kenwood and a pleasure to walk! 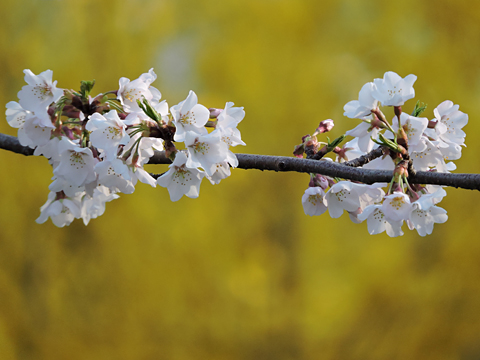 Since we had a coupon for a birthday meal, we went for dinner to Not Your Average Joe's, where we split the wonderful butternut squash flatbread with maple syrup, after which I had the even more fantastic almond crusted goat cheese salad with candied nuts and raspberries, half of which I couldn't finish, particularly since we also split the Peanut Butter Thing for dessert. We came home for the Maryland-Kansas game, which sadly the Terps did not win. At least Oregon (the team of Paul's youngest brother, whom we spoke to earlier) is about to knock Duke out as well!
Collapse