Quickie because we're watching The Ten Commandments which ABC decided we needed before Easter even though Passover is nearly a month away. We picked up Adam and Christine and went to meet Paul's parents for lunch at Rasoi, since birthday celebrations should go on for at least half the weekend. Adam had homework to do in the afternoon, but we went with Clair and Cinda to Brookside Gardens, where there were cherry blossoms in bloom, daffodils all around the woods, and many frogs mating noisily! 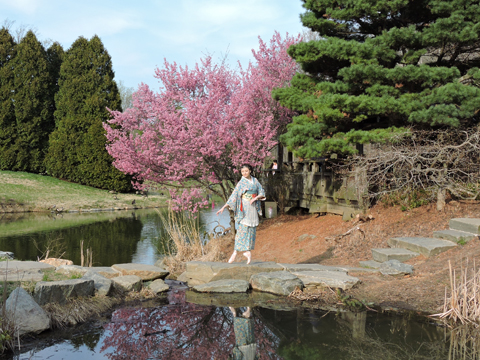 We were still stuffed from lunch when we got home, so we kind of snacked instead of properly having dinner while we played with the cats and watched NCAA basketball (no regrets that Villanova beat Kansas, though if UNC wins the tournament, I reserve the right to take that back). Daniel went to his first caucus in Washington, which sounds like quite an experience -- I've always lived in primary states. Now I must go listen to Charlton Heston fulminate and try not secretly to root for Yul Brynner...
Collapse