Saturday started badly and only got worse until very late in the afternoon, when we finally got out of the house in beautiful weather that's turning colder as I type this. Paul's mother called after midnight to tell us that Paul's father had fallen and broken his hip in three places that evening; he had surgery which seems to have gone well, but he'll be in the hospital for several days and in rehab for several weeks. We spent lots of time on the phone with relatives and texting others, waiting for my mother-in-law to call, not being sure whether we were going to Hanover or not. Eventually we went to the canal, where we got to see turtles, frogs, a snake, and bluebells: 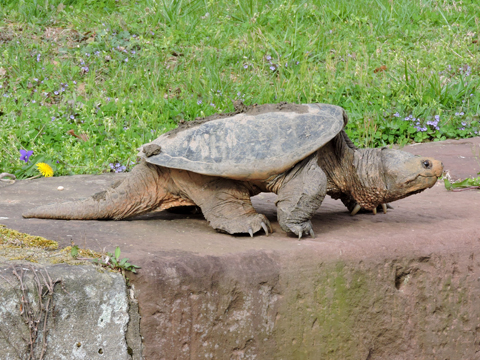 We had to stop at a couple of stores on the way home (being nearly out of cat food was becoming a crisis) but we made it back for the second half of Villanova blowing out Oklahoma, which was lovely to watch. The only thing that would have improved the basketball situation is if Syracuse could have beaten North Carolina, but at least I'll be able to root for someone to win the championship instead of not really caring because I liked both teams, which would have been true had Syracuse played Villanova. Now we're watching Peter Dinklage on Saturday Night Live, whose version of the next season of Game of Thrones is probably more fun than Game of Thrones!
Collapse