We spent a really nice Sunday in York with Paul's parents, where we ate lunch and enjoyed the sunshine in between Skyping nearly all of their children and grandchildren -- David and Maria plus Lukas, Jamie, and Rafael, Jon and Brooke plus Holden and Noah, Maddy, Daniel, and Adam. It was great to catch up with everyone and Paul's father is feeling so much better, though he's frustrated being in rehab when he'd like to get up and walk in the sunshine!

We got home in time for a quick dinner before Madam Secretary -- I'm amused how often Henry is stuck in the role of damsel in distress -- and Elementary -- it's obvious that Sherlock never watches TV or he'd be able to guess as early as the audience can who's probably behind all the stuff he always wants to blame on his father. Since it's been lovely out, here are some spring flowers and animals from around my neighborhood and right nearby (deer photo by my mother): 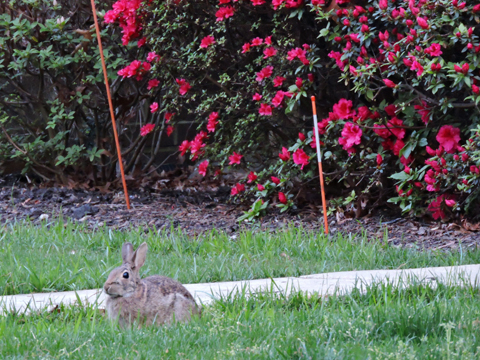