It's been kind of a weird Tuesday around here, in part because Maryland held its primary election, so at lunchtime we walked over to vote at our kids' elementary school, where we were surprised to be handed paper ballots because this time around, to avoid miscounts, our state is having voters mark paper and then scan them so there will be a physical record if something goes wrong with the machines. It was a good election day for me, since the candidate I really want to replace Barbara Mikulski in the Senate won the Democratic nomination, and I'm delighted that Clinton did so well, too.

It was also nice to walk through the neighborhood at the height of azalea season, when there's so much color everywhere -- the last of the cherry and apple blossoms, the first of the irises, many tulips, some peonies. The rest of my day was mostly work and chores until dinnertime, which ended up being late so we ate while watching The Flash, which was pretty good (Bechdel pass!). Then we also watched Agents of SHIELD, which continues to be wildly uneven (too many characters and not my favorites talking) before the season finale of Limitless, which had better come back next season! Brookside animals: 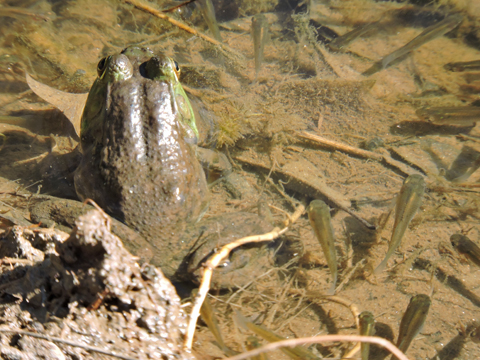