I feel like days keep getting away from me while I'm just trying to get the basics done! On Wednesday, one of them was re-uploading all my Green Man Review articles because it turns out that since I had them linked on the now-defunct site, I'd never put them on my on web page though I'd saved HTML drafts, which had to be updated and uploaded. I probably spent too much time reading and responding to election coverage, and we caught up on Once Upon a Time, where the Mills women are the only thing worth watching.

We did get to have dinner with Angela at California Tortilla -- I hadn't seen her (or eaten there) since before I went to L.A. last month, and she and I have both had a lot going on in our lives to catch up on! We came back to my house and listened to Hamilton while drinking tea and playing with the cats. After she had to go home, Paul and I watched Nashville, on which Scarlett and Gunnar sang a lovely song and everyone continued to act like bratty teenagers, again. Garrett Park azaleas in bloom last weekend: 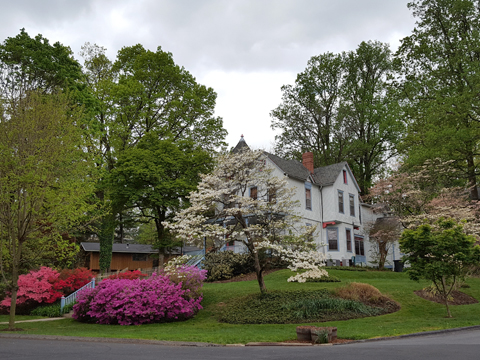