It was unseasonably cool for Beltane -- probably too chilly for what the traditional rhyme says the first of May is for, and it rained hard all morning -- but in the late morning Paul and I went to Mount Vernon, where we met Cheryl and went to see the Revolutionary War reenactment going on all weekend, including a battle demonstration by several hundred soldiers in George Washington's army as well as Redcoats, Hessians on horseback, and some very loud cannons. We also got to see this spring's lambs, the batteau being built in the lower farm, some of the craftspeople and farmers who work on the estate, and the many tents put up for the officers and ladies staying for the event.

We ate lunch at Mount Vernon (there was bread and cheese for sale by the battlefield, plus the excellent cheese always for sale in the cafe there), visited the chickens and pigs, saw lots of wild birds including the ospreys who built a nest down by the dock, and eventually drove home along the river near dinnertime, which we decided should be peanut soup in Washington's honor. I was on the phone through half of Madam Secretary so I missed what set certain events in motion but I saw how they played out, and we watched Elementary (needs more Watson, not to mention Moriarty) around some of the Yankees-Red Sox game. Here are some photos from the Revolution: 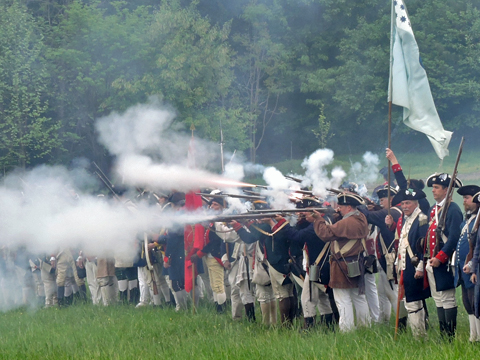