Monday began warm and sticky. I had a doctor's appointment for a blood pressure check (not too surprisingly given the past few weeks, it wasn't great) and it felt like summer coming and going from the parking lot. We took a walk in the late afternoon as the skies grew dark. Then our phones started beeping with thunderstorm warnings, and we got home just before the worst hailstorm I've ever seen -- thousands of chunks of ice the diameter of quarters falling on our roof, windows, deck, and vehicles. 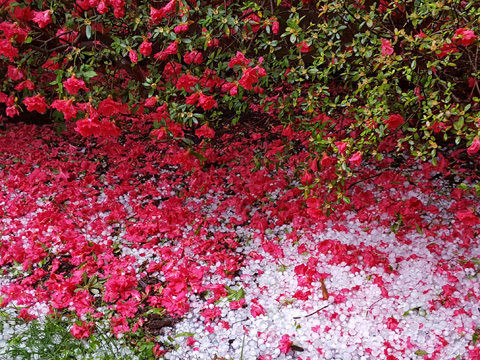 I got started on my Voyager review in case we go to York early this week. Then we watched the first episode of Houdini and Doyle, which I liked with some caveats -- it looks stylish though has some modern anachronisms, the characters are interesting but the Awesome Woman is being made so Awesome that it feels at times more like being lectured than hearing genuine emotion expressed, and I didn't love the storyline. Will definitely give it another week. Blindspot, which is always a Bechdel triumph, is very good but so dark!
Collapse