We spent Wednesday assuming that on Thursday we might be going to Hanover to help move Paul's father out of the rehab place he's been at except when hospitalized since he broke his hip, but his roommate has some kind of infection, so they aren't releasing him until they test him for the same infection, which will take at least another day, possibly longer if he does in fact have it. So I made sure most of my work was done by Wednesday evening, though the chores are lagging and I'm behind on correspondence and stuff, which I guess I will be trying to catch up tomorrow.

Apart from work, it was mostly an uneventful day. We had some drizzle and it was on the chilly side for May, which made it the perfect day for walking in the woods; neither the squirrels nor the bunnies appeared mind the wet grass. Since it was May the Fourth (be with you), Paul made Poe-boys (with Finn-landia cheese and Rey-moulade sauce) for lunch and Boba Fettucini with Wookie cookies for dinner. We watched Arrow only to realize we'd missed a week, then watched Nashville where some people were grownups for a change! Look, animals from Mount Vernon last Sunday: 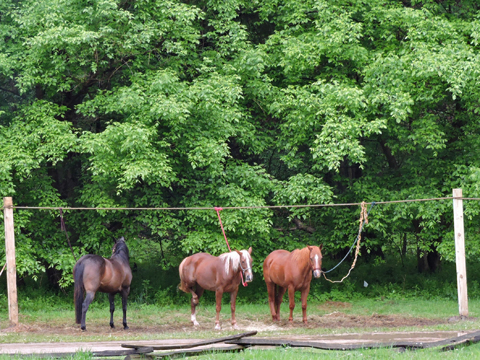