Friday dawned dark and rainy like every other day for weeks and weeks, but in the afternoon, an amazing thing happened and the sun came out! (The University of Maryland police department, which often tweets missing persons reports and resolutions, tweeted that the sun had finally been located.) I stayed in all morning anyway finishing a review of "Alter Ego" (just as terrible as the first time), then in the afternoon we went to take a walk along the sunny canal, where we saw many turtles and several snakes! 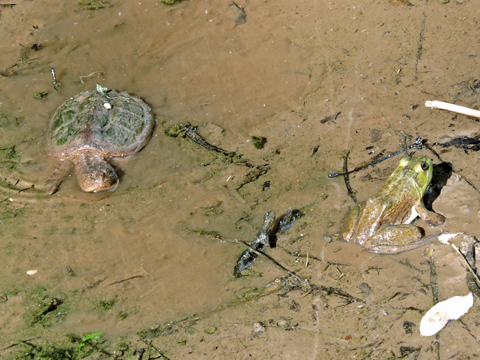 We stopped at the Bethesda Co-op on the way home for soap, potatoes, and wine, then we had feta and hazelnut ravioli for dinner with really fresh crusty bread and marmalade. Then we went to see High-Rise, which is like an unholy cross between Brave New World and Snowpiercer only set in a building instead of on a train and with a different cast (Hiddleston, Irons, Miller, Purefoy), somewhat higher production values, a lot more sex, plus an explicit anti-Thatcher agenda. I liked The Night Manager better!
Collapse