We spent most of Saturday in Hanover visiting Paul's parents, who seem much improved each time we visit them. It's been about five weeks since Clair's stroke, and while he still has speech issues, it's clear that his memory hasn't been impaired (and he can recall what's going on with the Red Sox). We brought in pizza, watched some baseball, and enjoyed the six bunnies chasing each other all around their backyard. 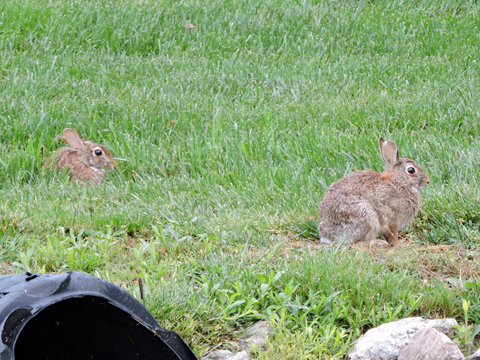 There was a thunderstorm while we were eating lunch and we drove home in alternating drizzle and bright sunshine. When we arrived, there was a rainbow over our neighborhood. We had veggie tacos for dinner, then watched 99 Homes, which was very good and very depressing, a thematic sequel to The Big Short but much more depressing in tone. Michael Shannon gives a terrific performance; at first I thought he was channeling Javert, but he's actually Thenardier.
Collapse