Adam is finished with finals and home for a couple of weeks before going to Texas State for an REU studying and working with the Internet of Things, so we spent the morning doing work and chores, then went to College Park to pick him up as well as all his stuff. He has had two wonderful roommates for the two years he's lived in the honors college dorm, though I'm sure he's happy that he'll have his own room next semester -- not to mention a bathroom, kitchen, and laundry facilities shared with only one new roommate in the same complex where Daniel lived for his junior and senior years of college. Considering that Adam wanted to study business when he met Brian and Faith and started dating Christine -- who are all engineers -- and now he's planning to get a dual degree in computer engineering and math, they have all been good influences.

The afternoon involved a great many loads of laundry and moving a lot of stuff around the house, then watching Eddie the Eagle since Adam hadn't seen it. He tried to explain the math he's studying in his directed reading program, but given that I haven't taken math since pre-calculus in high school, it pretty much all went over my head. We had burgers with sweet potato fries for dinner, did some more laundry, and put on Shaun the Sheep, which he hadn't seen either. Then he went to do his own thing and we watched Blindspot, which had that genuinely shocking and terrible thing! Which I want reversed! (Not the Big Secret, which I guessed a while back was coming; the thing with the gun.) I know the show is coming back and I want a certain character to come back with it! Here are a few more photos from the Virginia Renaissance Faire, including adoptable kittens! 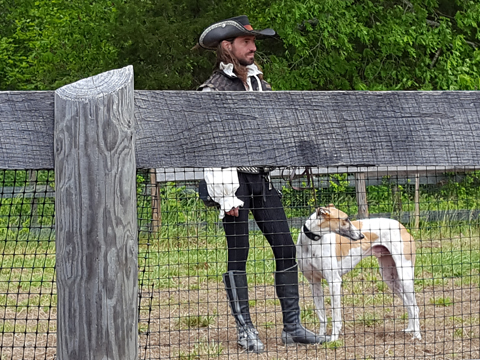