After weeks of May being unseasonably cold, hot weather has arrived with a vengeance and on Thursday gave us a nearly 90 degree, code orange day. I spent a lot of it fighting with work -- I don't care how popular "Blood Fever" is with the P/T crowd, it's an atrocious episode that twice tries to justify sexual assault -- then Paul and I went to Kohl's to pick up the clothes I didn't buy yesterday because of their stupid coupon policy. They lost an additional $21 from me because I'd found a shirt I almost bought there for less online.

Adam had lunch with my mother and afternoon plans with friends, but he was here for dinner, and afterward we all watched Deadpool because he hadn't seen it although most of his friends had. Then he went to chat with Christine, who's at the beach, and we watched Orphan Black, which as always was engrossing and distressing and I can't even feel sorry for Rachel. Here are some older photos of Baltimore's Seven Foot Knoll Light, originally dating from 1855 and now in the Inner Harbor, including a view of Lady Maryland from an interior window: 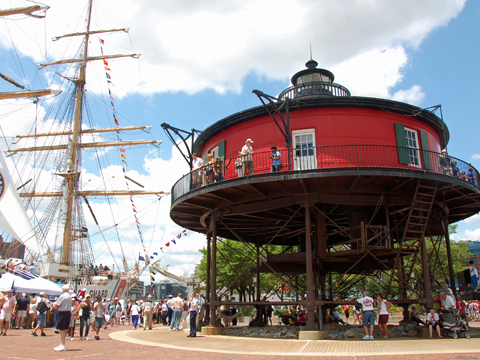