I'm typing this in Daniel's room where Adam is currently packing for his trip to Texas, where he'll spend two months at an REU at Texas State. Earlier today we went to Minerva with him and Christine, then went to see X-Men: Apocalypse, which I enjoyed though didn't adore -- it has some lovely elements (Quicksilver, hero worship of Mystique, Charles and Erik never shutting up about each other despite attempts to give each a gratuitous heterosexual love interest) but most of the female characters spent a ridiculous amount of time waiting for men to tell them what to do and some aspects of the plot are just silly. Still, it's a huge improvement on The Last Stand!

We had dinner with my parents so they could see Adam -- Mom had Memorial Day "USA" cake -- then we came home and, while Adam did laundry, we all watched Hail Caesar which is now On Demand. I thought it might seem less interesting on a second viewing but it's funnier and some aspects seem more on target than the first time, plus after having recently been at Vasquez Rocks and taken the Warner Bros Studio Tour, it was really fun to see so many of the locations used in the film (the WB courthouse was still dressed for this movie when we were out there). Now he is packing, so I am posting these photos of animals from Annmarie Garden's festival last summer, some real, some art! 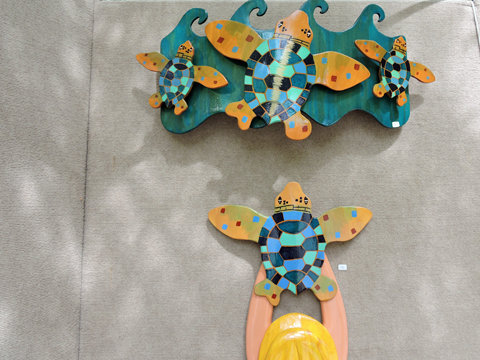