Sunday was the second day of the Washington Folk Festival, which we had to miss last year while moving older son to Seattle. Ocean Orchestra opened the day on the Potomac Palisades Stage with a wonderful set featuring songs I've loved by them for years which will finally be on an album coming out in a few months. We also saw the Celtic fiddle group Maelstrom, some glassblowing, some pottery-making, and a great many crafts! 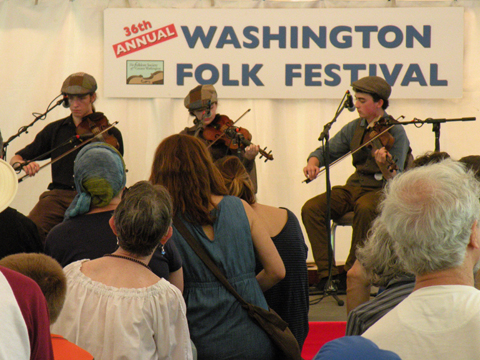 We'd brought a picnic which we ate at the tables in Glen Echo Park, and we walked over the new bridge on the old trolley tracks. Since it was on the way, we stopped at the Bethesda Co-op to get wine, gnocchi, fruit, sesame sticks, and veggie Italian sausage, plus at Giant to get cat food. Then, after veggie burgers for dinner, we watched Les Misérables (yes, the Jackman/Crowe version, shut up) in honor of the date!
Collapse