Paul and I spent most of Saturday in Pennsylvania visiting his parents. We came up a different route so we could stop and pick up Chipotle for lunch, taking us through New Oxford, which I really want to visit again because the center of town is a bunch of Civil War-era buildings and a train station housing many antique stores. We helped put together a new, lighter walker and Skyped with a bunch of relatives, including Daniel and Adam and our niece Maddy who's coming to stay with us at the end of the month.

It was miserably hot, but the storm we'd been warned might arrive never did. On the way home in the early evening, we stopped to pick up cat supplies at a Petco where dozens of puppies available for adoption were visiting, then at Giant to get food for the next few days. I was in the mood to watch Reign of Fire after having described the scene where Christian Bale and Gerard Butler reenact Star Wars to a friend last week, so we did that. Here are some flowers from Lewis Ginter Botanical Garden from last spring: 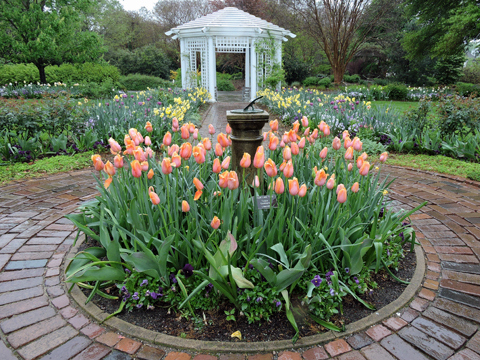