I had so much fun on Monday that I had a huge amount of work to do Tuesday. Some of this was on the computer and some of it was physical, since we are cleaning up Daniel's room so that our niece Maddy can move into it in a couple of weeks; I carried lots of things back and forth between the basement and the top floor, and finally Freecycled the papasan and ottoman we've had since we lived in Chicago, bought at the Pier 1 in Hyde Park before Daniel was born and well beloved by our cats.

It was a bit warmer than Monday but still nice enough to have the windows and doors open most of the day. We saw bunnies and chipmunks, though not many people had flags out for Flag Day. We watched a couple of episodes of Bones including "The Princess and the Pear" -- the nerd-convention Excalibur sword one -- and now we're watching Daniel Radcliffe on Colbert. Here are some photos of the Asian garden at the Glen Burnie mansion created by the founder of the Museum of the Shenandoah: 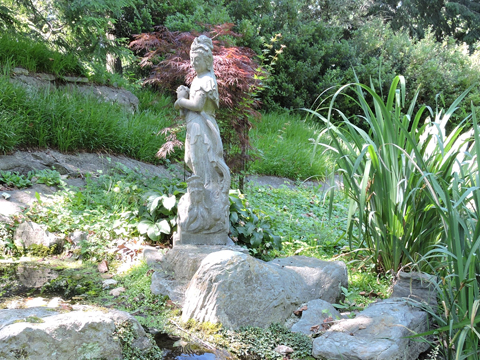