My Monday was not very eventful -- it was mostly work and chores -- but the full solstice moon was as beautiful as predicted, so I have no complaints. I discovered that we may be able to get a little bit of money for our inherited World Book encyclopedias, not because anyone really wants a 1981 encyclopedia for information, but because the spines are in perfect shape and apparently realtors staging houses for sale like encyclopedia sets to display in libraries, and I managed to clear an entire shelf in Daniel's room.

Meanwhile, I'm trying to figure out whether there's any value in old Bionicle packages when I'm not sure which Bionicle fit in which containers. We had leftover faux Beef Wellington for dinner, then watched Houdini and Doyle, which I wished had been slightly more literary, less conspiracy (anachronisms don't usually bother me, but Victorian fanboys make me roll my eyes), and BrainDead, which I wish was less didactic if I'm putting up with grossness and meanness. In honor of the solstice, a nearly-full moon evening at Great Falls: 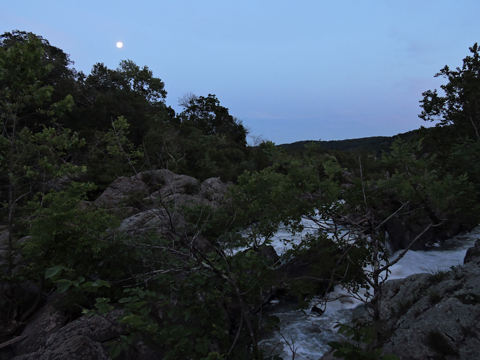