It rained pretty much all day in the DC suburbs for Independence Day, so we had a pretty quiet Fourth doing chores until early evening, when we went to see Finding Dory, which Paul, myself, and Maddy all liked -- in some ways I found it an improvement on Finding Nemo, though I missed Nigel and found it sadder since so much of it is pretty serious about life with a disability, occasionally with meanness involved. (The Pixar short Piper which accompanies the film is a thing of great beauty!)

We were going to try to see the Rockville fireworks, which were being launched close enough to the movie theater that we thought we'd be able to see them from the top deck of the parking garage. But when they hadn't started half an hour after they were supposed to and the rain continued to come down, we gave up, came home, and watched the Boston Pops fireworks show on CBS instead. Since I have no fireworks or DC summer monument photos to share, here are some from the cherry blossoms this past spring! 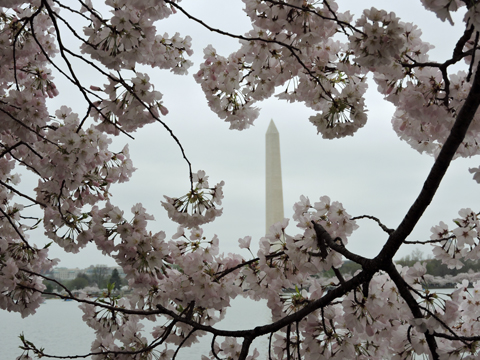