I had a nice Thursday even though my house is still in a state of chaos and we only have half a kitchen floor, plus on Friday we have to empty the refrigerator so we can move it and get the floor replaced under it. My bathroom, at least, is finished and as clean as it has been in a decade! The cats are still beside themselves and Daisy threw up three times in the past two days, though they were calmer tonight and three of them crashed in my room for a while (niece let Cinnamon hang out with her, which made Cinnamon so happy). Plus we saw all of the France-Germany game, which ended a lot better than the Nats-Mets game! 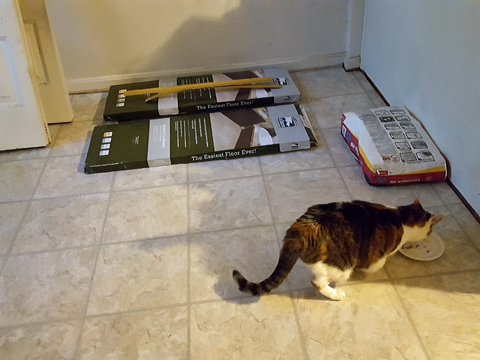 The final photo above was taken by Katniss and Effie's foster mom to show off the seven kittens she is currently fostering, so if you are anywhere in the greater DC-Baltimore area and looking for an adorable kitten, please contact me! The news continues to suck. I mostly finished my review of "Real Life" (spoiler: still awful). Maddy and I went out to dinner at Cheesecake Factory with Angela and Carrie, a good friend of hers who also has a niece who recently moved in with her; the girls are both lovely and it was great getting to see Angela twice in one week. Tomorrow Maddy is going out with Christine and I have more chores!
Collapse