I put those lyrics there because I associate them with Pokemon -- N'Sync's cover of the song is on the first Pokemon movie album -- but even more, I associate them with Star Trek: Voyager for reasons that some of you will recognize instantly and some of you never will. I kept seeing people in the neighborhood walking by playing Pokemon Go, and since son and I had had a conversation the day before about how he didn't think he'd find as many Pokespots near our house as his lab group at Texas State has been finding on campus, I downloaded the game and walked in a circle around the nearest cul-de-sac, during which time I caught two Pidgeys and two Rattatas to go with my initial Squirtle. I also caught -- well, saw -- a medium-sized bunny (see below). 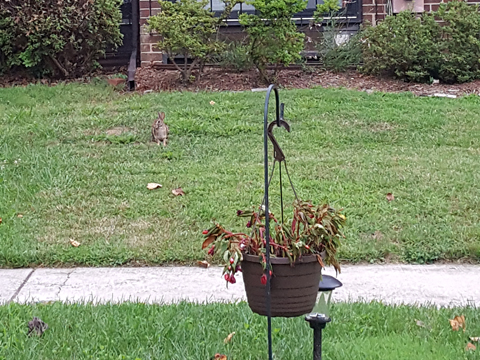 The rest of my Sunday was entirely about cleaning and watching sports in the background -- first the Wimbledon men's final, then the mixed doubles, then the Euro 2016 soccer final, then the end of the Orioles game. In between I did a lot of reshelving, sorting, discarding, and cleaning in the kitchen and dining room. We'd had plans to go see the Wonder exhibit at the Renwick before it closed, but as happened every other time we've set out to go see the exhibit, something else intervened, so I'm going to assume the exhibit would have collapsed on my head or something if I went and I was meant not to see it. We have put out piles and piles of food magazines for recycling and now we're watching the Stephen Fry chef Bones episode.
Collapse