It was incredibly hot again on Friday. I posted my review of Voyager's "Distant Origin" early so that after lunch we could go to Kenilworth Aquatic Gardens, which is having its Lotus and Lily Festival on Saturday when the park is expected to be very crowded so we figured we'd go when we could see it with far fewer people. Despite the heat, there was a nice breeze off the Anacostia River, the lotus blossoms were just coming into full bloom, and we saw herons and egrets in the marsh plus lots of evidence of beavers who caused the trees to be wrapped in mesh wire (and though we didn't see any beavers, we did see a groundhog who dove into a hole too quickly for me to photograph). 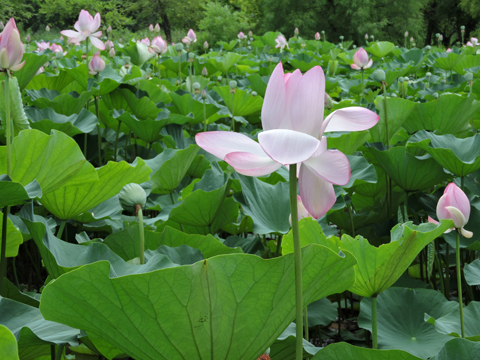 We went home via College Park to stop by the Alice in Wonderland exhibit at the University of Maryland's Hornbake Library so Maddy could see it, plus we showed her a bit of the campus. (I see why Pokemon Go is so wildly popular at colleges -- there were five pokespots within twenty steps of the library, plus half a dozen more between the parking lot and the main road through campus; the park had three Pokespots but I only saw three Pokemon in the time we were there!) We had dinner with my parents, tried to figure out what's going on in Turkey before concluding that no one is sure yet, watched the end of the Nationals game, and now we're watching the JFK episode of Bones.
Collapse