So yesterday I claimed it was Tuesday even though it was Monday -- an easy mistake this week when I just want Thursday to be over already. The actual Tuesday was uneventful anyway, at least until evening when we had an unexpected thunderstorm that caused several alerts plus a flash flood warning. Maddy was out with Christine and Adam's friend Maddy dyeing her hair, so we just had crazed cats trying to hide all over the house while we were trying to watch the Bones season five finale.

The rest of my day involved work, chores, dyeing my own hair (don't get excited, I was just covering the gray), and trying to decide whether to laugh or cry not just about Melania Trump plagiarizing Michelle Obama, which I might even have forgiven if she'd owned it because Michelle's was a really good speech, but the lies and excuses make me wonder how Donald dares to call Hillary dishonest. Since I've mostly been in Hartford on weekends, here are Skyline Drive photos from last winter: 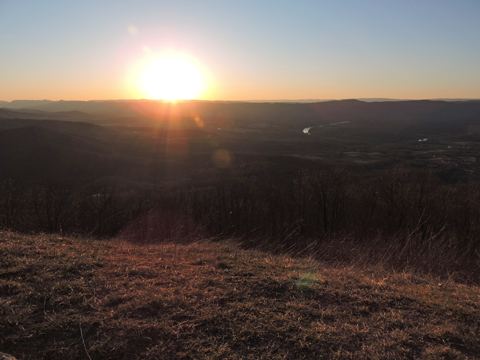