It was insanely hot and humid in DC on Friday and tempers were short...even on Facebook, where my one snide comment about Donald Trump's hypocrisy, claiming he was going to keep LGBTQ Americans safe from foreign ideologues, led to one blocking, two defriendings, and one tantrum. I stayed in the air conditioning and posted a review of Voyager's "Displaced", which thus far has generated no hate mail though it was a very negative review.

We had dinner with Maddy, Christine, and Adam's friend Maddy at my parents' house, since the girls had plans for a sleepover in the evening. We all Skyped Adam, who was exhausted after working all night on a final research project for his internship, then Maddy and Christine went to Maddy's house and Paul and I came home to watch some Bones and late night comedians to help us cope with the Republican convention. Great Falls summer animals (warning: snakes): 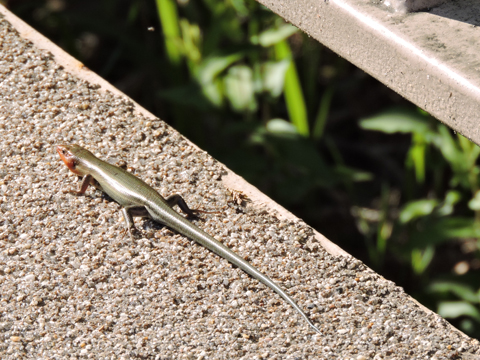