Guess what, it's still really hot here! And I did a lot of walking, because I found out about Pokevision, so when there was a Jigglypuff (finally!) or a Goldeen around the corner, I could rush out and get it. But otherwise it was an uneventful day. I wrote most of a Voyager review, I took Maddy to feed and play with the cats she's watching and played with them while she did various chores.

And I watched the Democratic National Convention and enjoyed pretty much every moment, from the Broadway singalong to Biden's speech to Kaine's speech to that fantastic introduction for Obama to Obama's speech (and he is still the greatest speaker in half a century, possibly an entire century though I've only heard JFK and FDR in recordings so I probably can't judge fairly).

So I'd call it a pretty good day, except older son discovered that he has bedbugs in his building (is it safe to bring his luggage in the house when he visits next month?). Speaking of houses, here are some of the Dream House installations in the Small Stories: At Home in a Dollhouse exhibit at the National Building Museum, in which artists were invited to build miniature rooms: 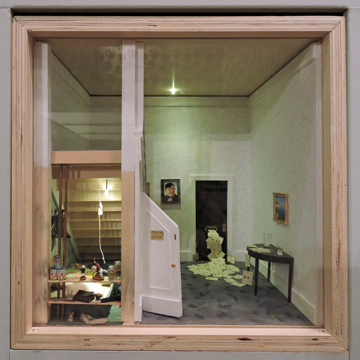