It was unpleasantly hot on Friday from very early in the morning, when I took another early walk because I knew it would be too miserable later (the bunnies were out, even they knew it would be too miserable later). Then I came home to finish my review of Voyager's somewhat predictable and oddly nostalgic "Nemesis", a good episode to watch the week of Star Trek's 50th anniversary. Rose visited the cats, much to their delight.

We all had dinner with my parents, which included a Star Trek anniversary celebration cake, then came home and watched the Terps gain a huge lead over the Golden Panthers before deciding that we didn't need to watch the end and put on the 9/11 episode of Bones. Here are some photos of two shows by Don Juan and Miguel at the Pennsylvania Renaissance Faire, including the Weird Show, which involved music, popping balloons, and fire: 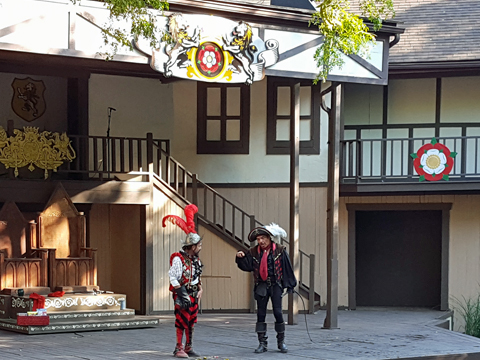