I had a very social Tuesday, though when I woke up I thought my whole day might just be work and chores! Alice had an appointment in Bethesda and got out early enough to come have brunch with Maddy and me, so we went to Starbucks and hung out for a little while. Then I took Maddy to the mall to shop at Bath & Body Works, where we both bought fall scented stuff, and Forever 21, where she bought clothes and I snuck across the hall to look at Hallmark Halloween decorations.

Angela came over for an early dinner (tacos and chips with Maddy), then Angela, Paul, and I went to see Florence Foster Jenkins, which was very enjoyable. The script is a bit predictable even though I knew nothing about the titular subject, but Streep and Grant are great together, and it's beautifully filmed, especially the costumes. I hadn't seen Angela in a month so it was really great to catch up! Here are some of the cows and chicks at South Mountain Creamery last weekend: 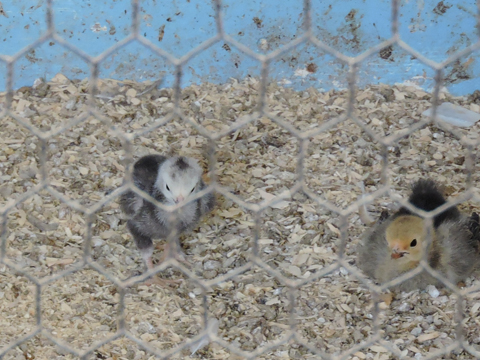