...where we have arrived after a long day of travel, first taking Maddy to stay with Alice for a couple of days, then driving to Dulles and having lunch at Bistro Atelier which has quite good eggs florentine before the flight, during which we watched Dad's Army, which is hilarious -- rather sexist in ways not entirely appropriate to its era but fun and well-acted -- and Dear Eleanor, a teenage girl road trip movie with some craziness in the premise but delightful performances and no judging of women's often difficult choices.

We brought sandwiches to eat for dinner on the flight, picked up a rental car when we landed, stopped at the mall near the airport to replace my phone charger which broke being removed from the plug on the plane, and went to visit Daniel for a while before checking in to our hotel. Friday is Take Your Parents To Work day at Amazon -- by pure chance we already had tickets to come out for Daniel's birthday when we found this out -- so we will get to see some of the campus, which doesn't usually happen during visits! Just a couple of pics: 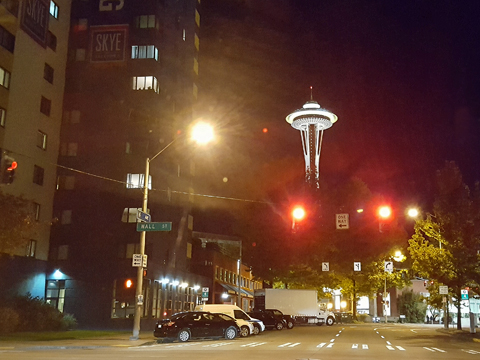