Paul had to go into the office on Tuesday because they're moving the cubicles around, something that's become fairly uncommon now that most of his division is overseas so nearly everyone works from home. So I had the house to myself and could listen to last night's Broadway concert for Hillary Clinton while I worked. Maddy went to school to try to arrange her interrupted schedule, but she may have to miss three weeks and join a new group when she gets back from California.

Tuesday was the anniversary of Molly's death and Maddy wanted to get a tattoo in honor of her, so after school she went to Kensington and got a triquetra inked above her wrist. She leaves for L.A. very early Wednesday. We had honey mustard chicken for dinner and took her to CVS for travel essentials around watching The Flash and Agents of SHIELD, which I'm quite enjoying this season because of Draco Malfoy and Ghost Rider respectively. Maryland Renaissance falconry: 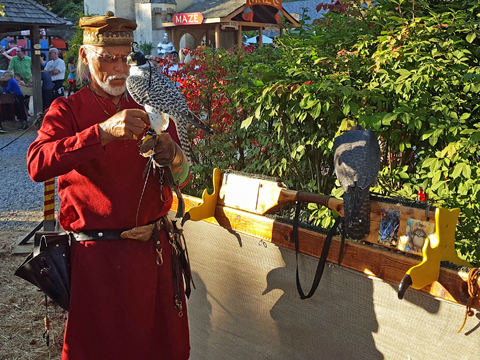